In this course, Dr Andrew Johnstone (University of Leicester) discusses early tension between the United States and the Soviet Union from 1917 to 1945. In the first module, we will explore the early differences between the US and USSR and the formation of the Grand Alliance from 1917 to 1942. After that, we will explore the wartime tensions between the two powers when they were in alliance from 1942-44, and the significance of the Tehran Conference of 1943. We will then explore the plans for the post-war world that were formulated from 1944 to 1945, and the significance of the Yalta Conference of 1945. In the penultimate module, we will explore the early presidency of Truman, his decision to drop the atomic bomb on Japan and its significance, as well as the end of the war in 1945. Finally, we will look at the post-war world from 1945-46, including the significance of the Long Telegram and the Novikov Telegram.

Dr. Andrew Johnstone is Associate Professor of American History at the University of Leicester. He specialises in 20th-century U.S. foreign policy, particularly on the theme of U.S. internationalism, and on relations between the state and private spheres in creating and mobilising support for U.S. foreign policy. He has written and edited a number of books along this theme, including US Presidential Elections and Foreign Policy: Candidates, Campaigns, and Global Politics from FDR to Bill Clinton (Co-edited with Andrew Priest) and Against Immediate Evil: American Internationalists and the Four Freedoms on the Eve of World War II. 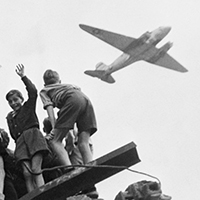