In this module, we explore the development of free-standing sculpture in the Archaic period, looking first at kouroi and then at korai. Kouroi discussed include: the New York Kouros, Kleobis and Biton, Anavysos Kouros, Aristodikos Kouros, the Piraeus Apollo, and the Kritios Boy. Korai discussed include: Nikandre, Berlin Standing Goddess, Peplos Kore, and Kore 675. In both cases, we trace stylistic and compositional developments, and in the case of the korai, we spend some time on the difference between the Doric peplos (worn by two korai) and the Ionic chiton (worn by another)

Professor Smith received her degrees from Yale (PhD, MPhil, MA) and Dartmouth (BA), and was also educated at the American School of Classical Studies at Athens, the American Academy in Rome, and the American Numismatic Society, and studied German at the Herder Institute, Leipzig. Before her appointment at Reading she lectured at Tufts University, Boston College, and the Massachusetts College of Art. She has also worked as an editor (Perseus Project; American Journal of Archaeology) and as curatorial assistant at the Yale University Art Gallery. She has excavated at the American School of Classical Studies' excavations in Greece (Athens' Agora and Corinth) and Spain (Pollentia, Alcudia, Majorca). 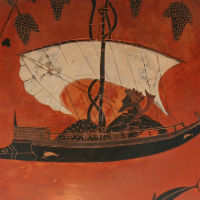