Amira K. Bennison became interested in the Middle East and North Africa while studying for her BA Hons in History and Arabic and Cambridge. After graduating, she went to live in Cairo for a year before studying for a Masters at Harvard University and a PhD at the SOAS. Her PhD, based on a year’s archival research in Morocco, looked at the impact of the French conquest of Algiers in 1830 on notions of political legitimacy in neighbouring Morocco. This involved an exploration of the significance of jihād in political legitimation in the western Maghrib published as Jihād and its Interpreatations in Pre-colonial Morocco (London: Curzon, 2002). She went on to the University of Manchester as a Leverhulme research fellow before moving to the University of Cambridge in 1997 where she is currently a senior lecturer. Her work has continued to explore political legitimacy but has expanded to encompass Islamic Spain as well as the Maghrib, and to consider urban planning, ceremonial and rhetoric alongside jihād. Dr. Bennison has appeared in several TV programmes about the history of the Middle East and North Africa including ‘Europe’s Lost Civilisation’; ‘The Thirties in Colour’ and ‘Islamic Science’. She is also a regular contributor to Radio 4’s ‘In Our Time’ with Melvyn Bragg. 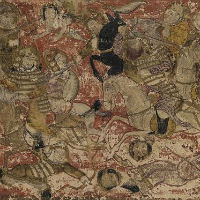