In this course, Professor Stephen Rockwell (St. Joseph's College, New York) explains how and why migration and immigration to and within North America caused competition and conflict over the period 1754-1800. We start by looking at immigration to North America and the 'Middle Ground' in this period. We then turn to look at the French and Indian War for control and influence of the Middle Ground. The next two modules will look at how Britain and later the US tried to control their populations and how these strategies were resisted. In the penultimate module we will discuss the unsteady nature of the early Republic. Finally, we will explore slavery and population movement in the early Republic.

Stephen J. Rockwell is a Professor of Political Science at St. Joseph's College, New York. He specialises on a number of areas including: national institutions; public administration; race, ethnicity and politics (including American Indian affairs and immigration issues); and American political development more generally. He has written a number of books including Indian Affairs and the Administrative State in the Nineteenth Century and How Big Government Won the West.

Slavery in the United States 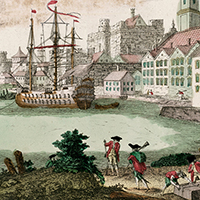