In this module, Christopher discusses a change in policy among the Americans in Japan. Previously driven by democratic ideals, the heating up of the Cold War in the Pacific region (including the outbreak of the Korean War) led the United States to take a more pragmatic approach to Japan - including an effort to build up the Japanese military under the name of the 'Japan Self-Defence Force'. The course concludes by looking at the legacy of the American occupation in Japan today - an issue that is becoming increasingly important in the light of China's recent territorial expansion in the region. Will we see a remilitarised Japan, and how will relations with China develop in the future? 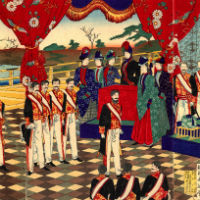