In this module we trace events from the end of Cicero's consulship in December 63 BC to the end of his proconsulship in Cilicia in 50 BC, focusing in particular on the political fallout from his decision to execute the Catilinarian conspirators, ultimately resulting in his exile from Rome in 58 BC, the rise of political figures such as Caesar and Clodius, and the continued influence of Pompey.

In this course, Professor Catherine Steel (University of Glasgow) explores the politics of the Late Republic through one of its central figures: Marcus Tullius Cicero. We begin by thinking about Cicero's early life and education, including his training in rhetoric and forensic oratory. After that, we turn to Cicero's career as an advocate, focusing in particular on the political and legal changes in Rome in the early 1st century BC and two of Cicero's earliest cases – his defence of Sextus Roscius of Ameria in 80 BC and his prosecution of Gaius Verres in 70 BC. In the third module, we look more closely at the nature of Roman politics in the 1st century BC, including the series of magistracies (or cursus honorum) that Cicero hoped to attain in the course of his political career, before turning in the fourth module to Cicero's consulship and the Catilinarian conspiracy. In the fifth module, we trace events from the end of Cicero's consulship in December 63 BC to the end of his proconsulship in 50 BC, including a year spent in exile from Rome. Finally, in the sixth module, we follow events as Caesar crosses the Rubicon and Rome descends into Civil War, focusing in particular on events following Caesar's assassination in 44 BC and Cicero's rivalry with Mark Antony – a rivalry that would ultimately lead to his own death on 7 December 43 BC.

Catherine Steel is Professor of Classics and Head of the Department of Classics at the University of Glasgow. Her research interests relate to the Roman Republic, the writings of Cicero and Roman oratory. Her recent publications include Reading Cicero: Genre and Performance in Late Republican Rome (2005), The End of the Roman Republic, 146-44 B.C.: Conquest and Crisis (2013) and (with Dr Henriette van der Blom) Community and Communication: Oratory and Politics in Republican Rome (2013). 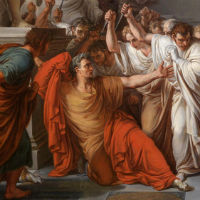